The Problem With Glucosamine Supplements

As a public service, LegitScript offers free limited product lookups so that people can check to see if a product they have purchased is dangerous or otherwise problematic. Frequently, we get searches for products that contain problematic ingredients such as marijuana, kratom, and SARMs. But we’ve noticed that one of the top ingredient searches on our website is “glucosamine.” What gives?

Glucosamine naturally occurs in human cartilage, which is the tough tissue that cushions joints. As a dietary supplement, glucosamine can be harvested from the shells of shellfish or made in the lab, and is typically taken orally. According to the Mayo Clinic, glucosamine is generally safe to take in appropriate amounts except possibly for people allergic to shellfish. So why are people searching for this ingredient, and what could make dietary supplements that contain it problematic?

Dietary supplements containing glucosamine are sometimes marketed with claims that they can effectively treat arthritis and other joint-related diseases. This is problematic because generally dietary supplements cannot be marketed for the cure, mitigation, treatment, or prevention of diseases. If they do, they may be considered drugs and subject to regulation by the FDA under the Federal Food, Drug, and Cosmetic Act (FDCA). For example, descriptions like the one listed below — which claims to treat or prevent arthritis, sciatica, and joint degeneration — could be considered problematic. 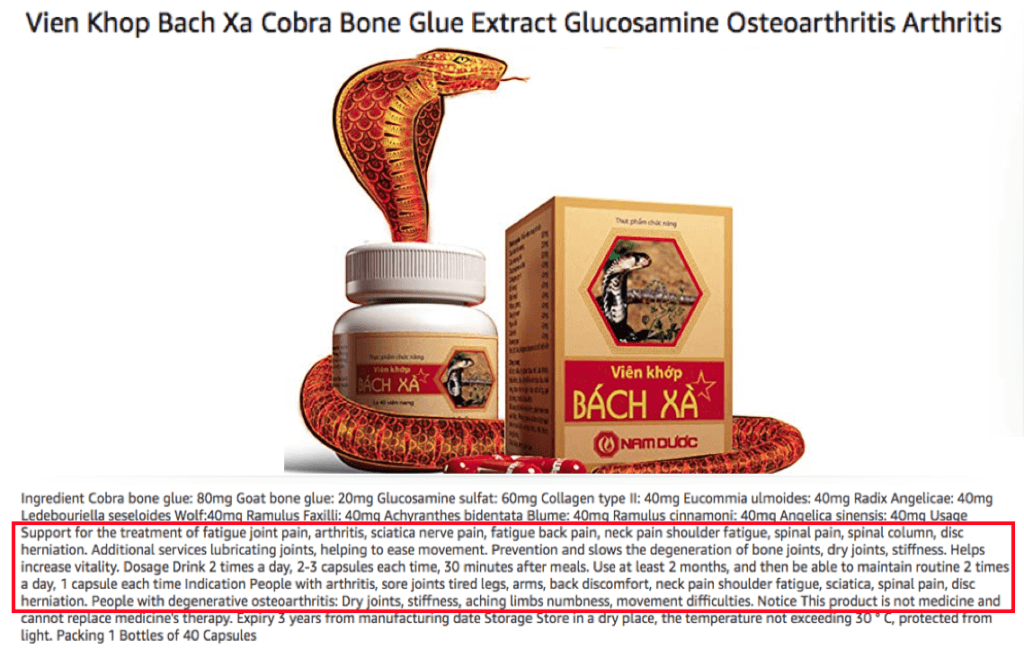 Furthermore, major studies of glucosamine as a treatment for osteoarthritis for knees or hips have had conflicting results, according to the National Institutes of Health (NIH). According to one two-year study, “those who received the supplements had no significant improvement in knee pain or function, although the investigators saw evidence of improvement in a small subgroup of patients with moderate-to-severe pain who took glucosamine and chondroitin together.” Other studies showed improvement in joint pain and function, so research appears inconclusive regarding whether glucosamine makes a difference in those suffering from arthritis and related diseases.

Unless there is compelling evidence that prompts the FDA to approve glucosamine for joint-related ailments, manufacturers and distributors of dietary supplements containing glucosamine generally cannot make claims that it can cure, treat, or prevent arthritis or any other disease. Internet users who search  for glucosamine on legitscript.com may be looking to see whether the ingredient is safe or whether certain glucosamine products have been flagged as problematic. We have a number of problematic dietary supplements containing glucosamine that impermissibly claim to treat diseases. Some of these manufacturers have even been served warning letters by the FDA because of their claims.

Merchants that carry dietary supplements would probably never consider glucosamine supplements to be problematic, but it’s important to consider not only the ingredients in a supplement, but the claims that are being made about a supplement. Our Dos and Don’ts of Internet Supplement Ads Guide explains more about structure/function and disease claims.

LegitScript has the world’s largest database of problematic products sold on the internet, including dietary supplements, designer drugs, pharmaceuticals, medical devices, cosmetics, and more. Contact us to learn more about unlimited access to our product database.