The Top Marketing Claims CBD Merchants and Manufacturers Should Avoid

One of the aspects of cannabidiol (CBD) sales that can attract regulatory scrutiny is the way in which merchants market their CBD products. In the past five years, the FDA has sent many warning letters to manufacturers and merchants of CBD products for claims that their products can prevent, cure, mitigate, or treat diseases. No FDA-regulated products may include these types of health claims unless the claim is supported by scientific evidence that has been reviewed and approved by the FDA. To date, the only CBD product to meet this threshold is Epidiolex, an FDA-approved prescription cannabidiol to treat certain kinds of seizures.

Although any health claim is subject to regulatory scrutiny and/or fines from card brands, there are some that may be at a higher risk of eliciting regulatory intervention. According to a statement by former FDA Commissioner Scott Gottlieb, the administration is most concerned about “companies marketing CBD products with egregious and unfounded claims that are aimed at vulnerable populations.” In this blog post, we look at some of the egregious claims that may increase the risk of regulatory scrutiny.

As one of the leading causes of death worldwide, cancer is a disease for which patients are often desperate for effective treatment. The scope and severity of the disease make it a prime target for opportunists promising effective cures or alternatives to more traditional treatments that have severe side effects, such as chemotherapy. The FDA has issued many warning letters to companies claiming CBD products can cure or ease the effects of cancer, most recently in April 2019 to Advanced Spine and Pain, LLC. Problematic claims cited include:

Alzheimer’s Claims and Other Serious Diseases

In addition to cancer, Alzheimer’s and other serious diseases are often the subject of problematic health claims. The diseases targeted are often widespread, chronic, and/or lethal. The FDA issued warning letters to Nutra Pure LLC and PotNetwork Holdings, Inc. in April 2019, in part for making claims that their CBD products were effective treatments for Alzheimer’s. Such claims include:

These websites were also cited for unsubstantiated claims regarding diseases such as fibromyalgia, anxiety and depression, diabetes, autism, Parkinson’s disease, amyotrophic lateral sclerosis (ALS), and more.

Consumers struggling with opioid addiction may be misled by marketing claims into believing that CBD is a proven alternative to pain relief. Former FDA Commissioner Scott Gottlieb repeatedly emphasized that CBD products making claims to treat or cure diseases are an area of concern for the agency because of the lack of reliable scientific evidence to substantiate these claims. Examples of claims cited in recent warning letters include:

In addition to CBD, many problematic products online promise to treat symptoms related to addiction. Download the free LegitScript guide below to read more about some of the most popular but problematic opioid alternatives and opioid-withdrawal products to watch out for. 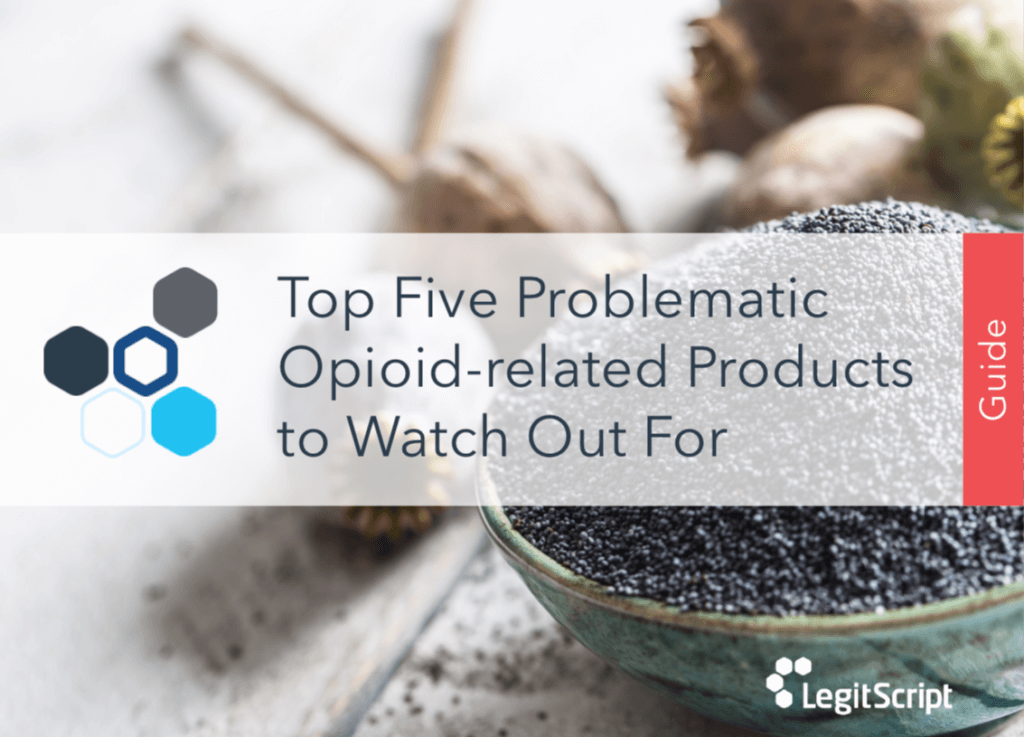 Where Do Claims Exist?

Merchants can be held accountable for claims made on anything that is under their control, including websites, product labels, and associated social media accounts. This can include testimonials made by customers on merchant websites or social media. To ensure compliance, CBD merchants should monitor any platforms under their control for problematic language made by customers or other third parties.

Want to demonstrate the highest level of credibility with consumers, payments partners, and federal regulators? Apply for LegitScript CBD Certification to stand out from the crowd, prove product quality, and gain approval from a trusted third party.

Previous LegitScript Announces New CBD Certification Program Next CBD Confusion in Iowa Highlights the Difficulty in Navigating Local CBD Laws
[Webinar]
[Webinar]
This website uses cookies. Some of the cookies used are essential for parts of the site to operate. Please see our privacy policy for more details. Accept