NOTE: Since the publication of this post, Chemist-4-U has discontinued the activity described in this blog and is no longer classified as "rogue" by LegitScript. We have granted probationary certification status to this pharmacy after a comprehensive review, and are continuing to monitor the pharmacy and its website to ensure that it is only shipping within the UK or other jurisdictions where it is specifically authorized to do so, and that all of its activities are in compliance with the law.

Today, we’re releasing an exposé of a registered pharmacy in the UK, Chemist4U, also known as Innox Trading. 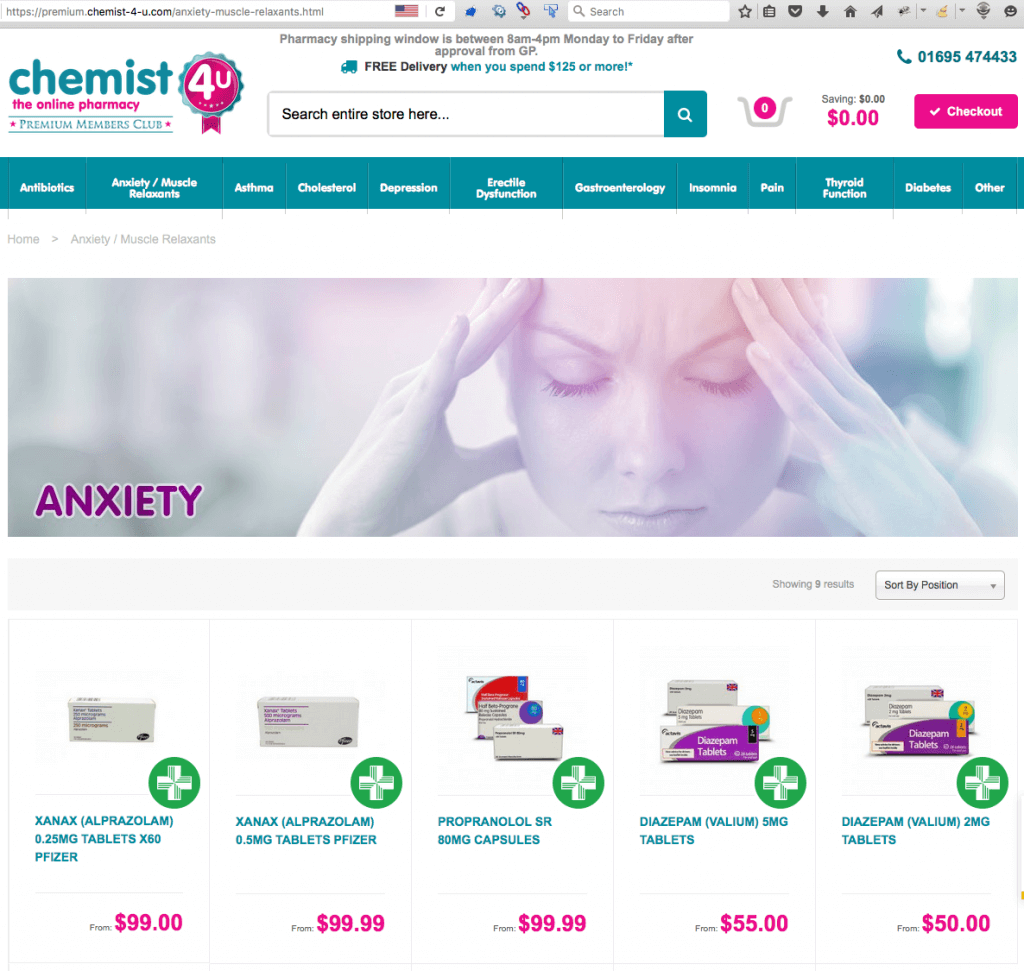 Chemist4U, at first blush, appears to be a legitimate pharmacy in the UK. It’s registered with the GPhC. It displays the registration seal offered by the GPhC, as well as a Trustwave “Trusted Commerce” seal and the EU Common Logo, a seal of approval granted by EU governments attesting that the internet pharmacy “website is operating legally.” And indeed, if you go to the homepage, nothing seems amiss: the pharmacy sells a variety of products (mostly OTC), and the prescription drugs are all of the non-controlled variety, including Cialis, Tamiflu, and Champix.

Adding to the pharmacy’s apparent legitimacy, chemist-4-u.com makes it all but impossible to order prescription drugs if you aren’t in the UK — a good thing, since it’s licensed nowhere else.

But there’s another internet pharmacy hiding within the chemist-4-u.com domain name: premium.chemist-4-u.com. Marketed as a “Premium Members Club,” we compared it to an invite-only champagne room at a “gentlemen’s club” — one that in this case, gives premium members outside of the UK access to controlled substances like Xanax and Valium, without requiring them to visit a doctor. Our report says:

Like the VIP room in a strip club, the pharmacy’s “Premium Members Club” accessible on this subdomain grants its members certain opportunities that are unavailable to everyday, walk-in customers. This includes the ability to buy controlled drugs (addictive medicines) including Xanax, Ambien, dihydrocodeine, and Klonopin — drugs unavailable on the seemingly legitimate homepage — without a valid prescription based on a prior in-person medical evaluation by the prescriber.

And by contrast, the Premium Members Club makes it impossible to select the UK as a shipping destination, primarily focusing on the US and a handful of other countries. As we explain in our report:

(It’s) a classic move by rogue internet pharmacies: operate legally where the pharmacy is domiciled and registered, but target other countries with illegal drug sales. After all, what reason would a pharmacy registered and located in the UK have for serving customers everywhere except the UK?

The reason is simple: being physically located and registered in the UK, Chemist4U wants to reduce the risk of losing its license or facing law enforcement action, so it makes sure to only illegally sell controlled drugs to other countries. If someone outside of the UK overdoses or dies, Chemist4U can argue that the UK authorities have no jurisdiction to consider the matter. Conversely, Chemist4U may hope to argue that it is outside of the jurisdiction of the US Drug Enforcement Administration, Food and Drug Administration and their counterparts in other countries, and can therefore ignore those countries’ laws and regulations, shipping controlled drugs without a valid prescription to customers in those countries with impunity.

Chemist4U, it seems, has been caught.

There are a few problems with this. First, most obviously, Chemist4U is selling controlled substances without a valid prescription, which has been a big contributing factor to our opioid abuse problem in the US, and overdoses and deaths in the UK. And, in the US, it’s a felony offense.

Second, however, is the pharmacy’s use of the EU Common Logo, which is provided by UK regulators and assures patients, payment providers (in this case, SagePay), and other e-commerce companies that the online pharmacy is “operating legally.” Simply put, UK regulators need to do a better job monitoring for this sort of behavior. After all, payment providers are being told that they can rely on the EU Common Logo as proof of legality. In this case, it’s not accurate.

Transaction laundering comes in several flavors: one of them is when a merchant essentially launders transactions for itself, setting up a hidden payment page that the payment provider likely never saw and never underwrote. It’s one good reason for payment providers to use LegitScript not just for pharmacy merchant certification and monitoring purposes, but for all of their merchant monitoring needs.

When he's not hucking over a waterfall in a Riot whitewater kayak, John Horton can be found dodging raindrops riding his bike to LegitScript. John's a native Oregonian but lived in Tokyo and Washington D.C. for about seven years each. Likes: local microbrews, waterfalls under 20 feet, in-office baristas, old Jim Croce songs and well-tuned grands. Dislikes: rogue Internet pharmacies, coconut flakes, flaky people.
Previous (Not a) Surprise! Rogue Internet Pharmacy Run by Convicted Criminal Next Electronic Frontier Foundation: Not Quite Right on the Facts
[Webinar]
[Webinar]
This website uses cookies. Some of the cookies used are essential for parts of the site to operate. Please see our privacy policy for more details. Accept