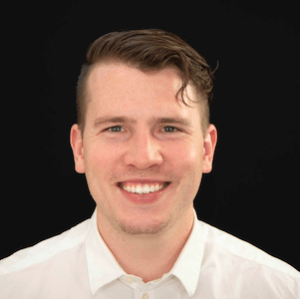 In the United States, the legal status of hallucinogenic mushrooms appears to be at an inflection point. In May 2018, President Trump signed the “Right to Try Act,” which permits terminally ill patients to try drug treatments not yet approved by the FDA, including the use of some psychedelics. Furthermore, Oregon recently became the first state to decriminalize psilocybin and legalize psilocybin-assisted therapy, while the cities of Denver in Colorado, and Oakland and Santa Cruz in California have decriminalized these mushrooms at the local level. Although decriminalization of psychedelic mushrooms has seen success at both state and city levels, their status as a controlled substance at the federal level continues to present significant BRAM- and GBPP-level risk.

Psychedelic mushrooms, colloquially known as “magic mushrooms” or “shrooms,” are known for the intense psychoactive effects they induce. Psilocybe cubensis is arguably the most well-known variety of hallucinogenic mushroom. It contains both the psychoactive compounds psilocybin and psilocin, and is prohibited in a number of jurisdictions, including the US, where it is a Schedule I controlled substance. Common strains of Psilocybe cubensis include Golden Teacher, Blue Meanie, Penis Envy, Maui, and B+ Cubensis. These mushrooms are consumed in a variety of ways, such as eating, brewing in tea, or consuming in a powdered and encapsulated form. Psychological effects can include sensory enhancement, distortion of one’s sense of time, visual hallucinations, excited mood, and unusual patterns of speech and thought. Physical effects can include nausea, muscle weakness, and loss of coordination, with extreme cases resulting in psychosis or death.

LegitScript monitors for warning signs associated with the sale of psychoactive mushrooms. Merchants offer these products in many forms, with varying degrees of obfuscation, ranging from those explicitly offering dried mushroom caps and mushroom powder, spores, and/or spore syringes; to merchants offering products under the guise of medicinal or research uses. Microdosing, or ingesting a low dose of psychedelic mushrooms, may be marketed with pseudo-medicinal language; merchants frequently offer psilocybin mushrooms for microdosing as a treatment for anxiety, depression, or other conditions.

Merchants may also offer their products with disclaimers that products are only for microscopy purposes, or other similar language. For example, the website shown below is offering “microscopy kits” using the names of strains of psilocybin cubensis mushrooms. 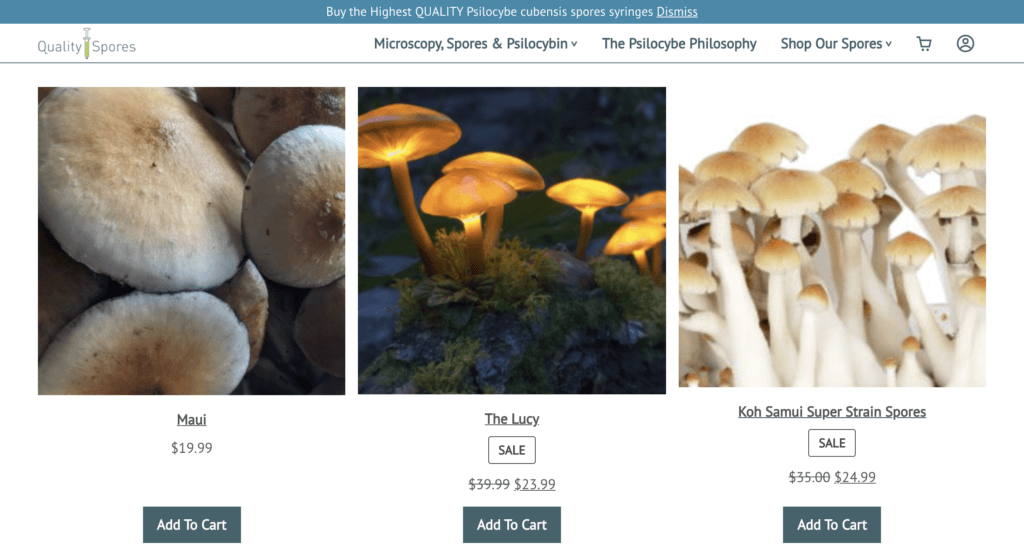 Merchants sometimes refrain from mentioning the words “psilocybe cubensis” or ”psilocybin,” instead referring to products exclusively by their strain names so as to avoid detection. The merchant above offers kits with spore syringes and other supplies, such as a microscope slide, which are meant to show that the merchant ostensibly only intends these products to be used for scientific purposes. The merchant explicitly states that they will not answer questions related to cultivation.

Not all mushrooms used for recreational purposes contain psilocybin or psilocin. Amanita muscaria, also known as fly agaric or fly amanita, is a highly recognizable mushroom (see screenshot below), with a white stem, red cap, and white spots. These mushrooms contain ibotenic acid, a neurotoxin, which renders them poisonous to humans. 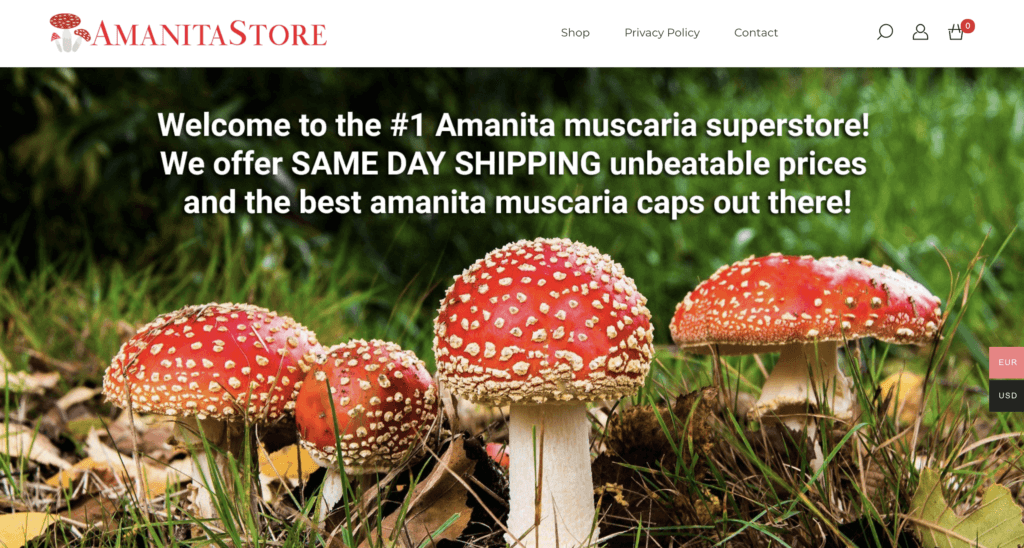 Psychoactive products may be problematic even if the psychoactive compound isn't explicitly banned.

However, they also contain muscimol, a psychoactive compound, and have historically been used for their psychoactive effects in some Northern European and Asian shamanic rituals. Although Amanita muscaria are known for their hallucinogenic properties, they differ from other “magic mushrooms” in that they do not contain the psychoactive compounds psilocybin or psilocin. Nonetheless, when marketed for human use, they are prohibited in a number of jurisdictions worldwide, including the Netherlands, Spain, and Australia.

As jurisdictions throughout the US become more open to the use of psychedelic mushrooms, merchants offering these products are likely to become more pervasive online. The conflicting approaches between local and federal jurisdictions can make monitoring and regulation of these products increasingly challenging, not unlike the challenges around cannabis. LegitScript is carefully monitoring the regulatory space around psychedelic mushrooms and will continue to provide noteworthy updates.

Some psychedelic products have been marketed for opioid addiction treatment. Want to learn more? Download our guide Top Five Problematic Opioid-related Products to Watch Out For. 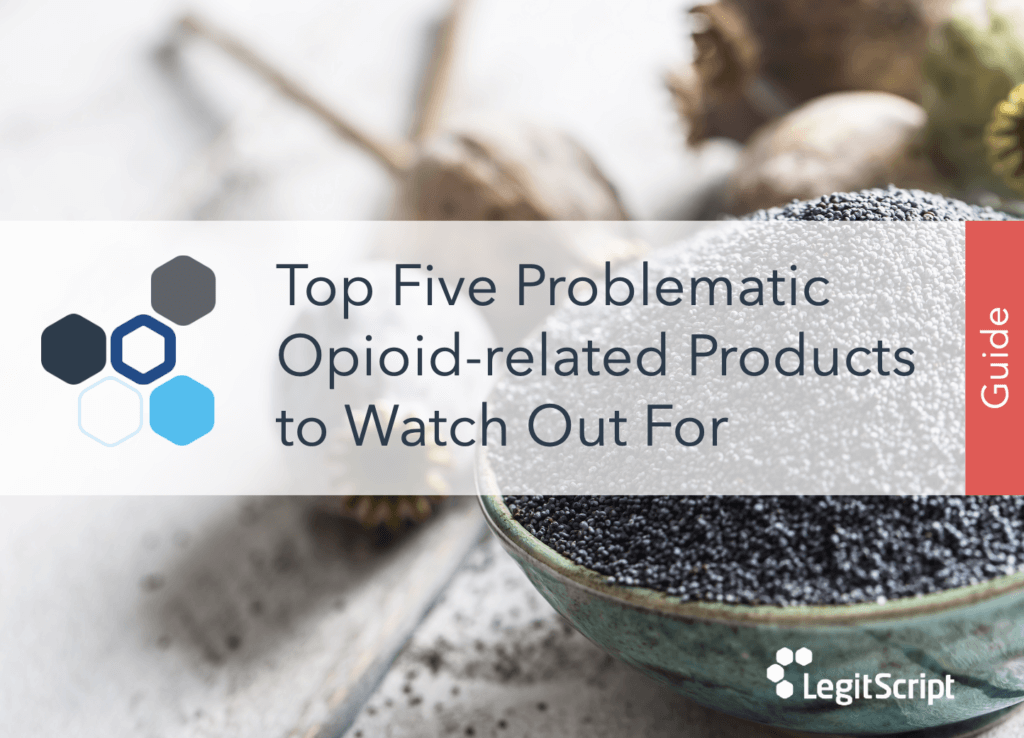 Hannah Verbruggen contributed to this story.

Previous The Super Bowl Can Cause Super Problems for Payment Service Providers Next If It Works As Well As a Drug, It May Be One
This website uses cookies. Some of the cookies used are essential for parts of the site to operate. Please see our privacy policy for more details. Accept